There are several ways Gradle stores information between builds to drastically reduce subsequent build times. You may be familiar with some of these methods, but what’s important is that they build upon each other gradually improving build speed. If you are only benefiting from one, then you have something to gain by also looking into the others.

This is the build directory(ies) within your project where Gradle puts generated code and files. If you clean and run an assemble of your application, you can explore those directories to see what is being generated.

As an Android developer, the most familiar generated files are probably R.java files. build directory is also where 3rd party generated classes live, like those created by Dagger and Proguard. Even the generated .apk lives here.

If you have a multi-module project, you’ll see that each module has it’s own build directory.

We started off by calling clean to delete the build directories to get a good sense of what gets put in these directories during assemble. In fact this is the only thing the clean task does. It doesn’t affect files outside your current project.

The first step to speed up our builds is to maximize the reuse of what Gradle puts in these directories. Gradle calls this reuse “incremental building.” If we were to assemble again, without cleaning and without changing any of the source files, we can get a good guess of what Gradle is “reusing”.

As you can guess, since nothing changed in your code, hopefully Gradle reused all of these generated files and did not have to do any new work. Ideally the re-build took only a few seconds. Any more time than that and you should scan (or profile) your build to see what was not reused.

I won’t go into any detail about how scanning works, there are many great blogs about how it, but it’s essentially a matter of passing --scan when assembling:

This will give us our initial baseline. We’ll run again without cleaning or changing any code:

You can inspect the generated HTML scan report of the second run to see which tasks were marked UP-TO-DATE. This means that Gradle did not have to run this task again. The best place to look is the “timeline” tab. (I found that scan reports are much more informative than profile reports, but you have to be willing to have that report hosted on Gradle’s site, which may not be your cup of tea).

The thing to look for is the steps that are not marked UP-TO-DATE and take relatively big chunks of time to complete. For me that’s this New Relic task. Your not-up-to-date tasks will be specific to your code. If you are lucky all of your tasks are already up to date. 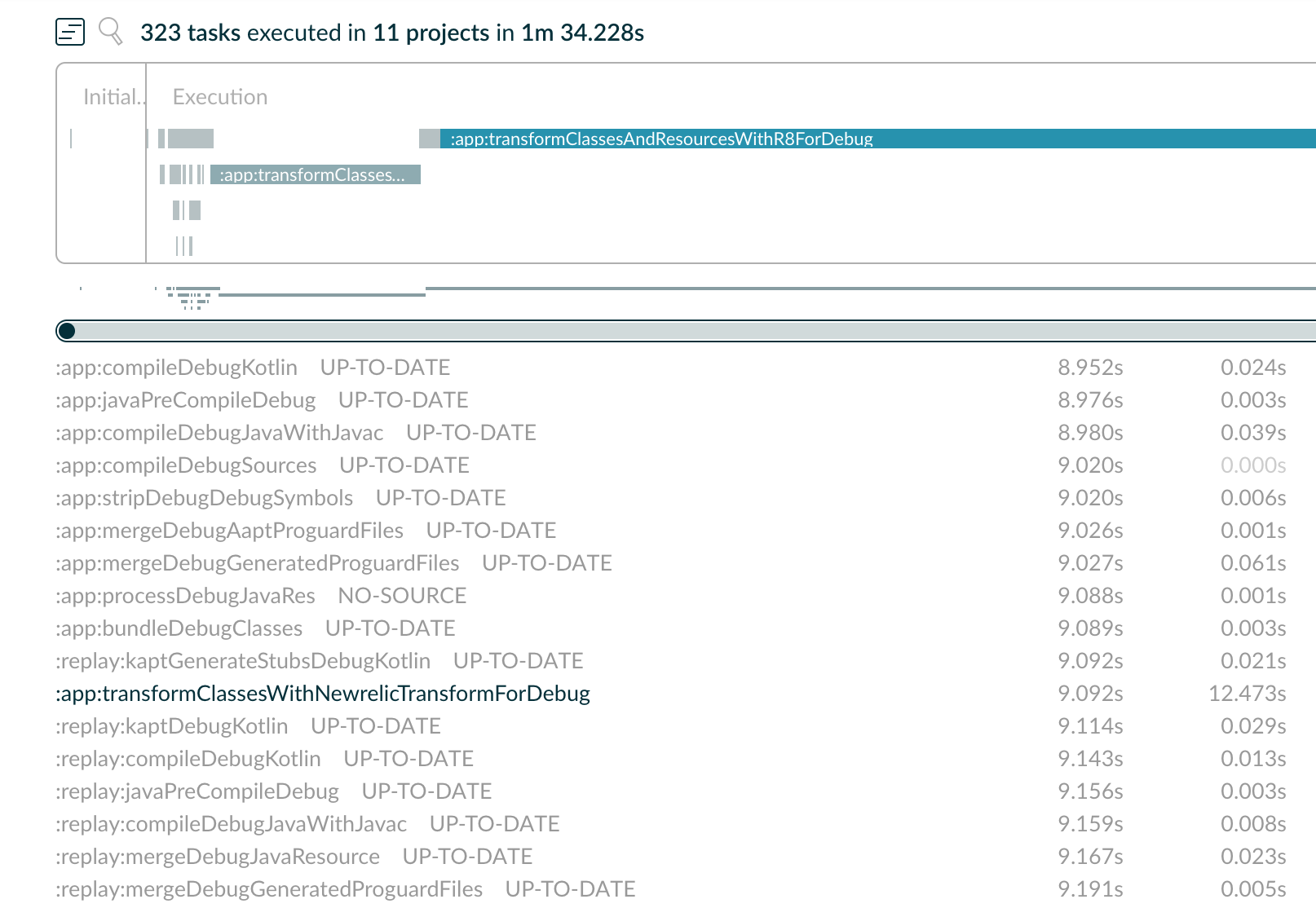 After figuring out the cause of the problem, I was able to rebuild with only a ten second build time. I can also see most tasks were up-to-date

I won’t go into detail about how to fix any not-up-to-date task. The fix will be specific to your situation. You should take care of these before moving on to the next section.

The previous “cache” applied only to your current project, on your machine. However there is another lesser known cache, called “build cache”. From Gradle’s documentation:

Build cache is a cache mechanism that aims to save time by reusing outputs produced by other builds.

Beyond incremental builds described in up-to-date checks, Task outputs can be reused between builds on one computer or even between builds running on different computers via a build cache.

Before you begin optimizing the task output cache, you should focus on the previous section to optimize incremental builds. Gradle says:

The reason for this is that under the hood Gradle is using the same cache logic:

Task output caching leverages the same intelligence as incremental build checks that Gradle uses to avoid work when a previous local build has already produced a set of task outputs. But instead of being limited to the previous build in the same workspace, task output caching allows Gradle to reuse task outputs from any earlier build in any location on the local machine. When using a shared build cache for task output caching this even works across developer machines and build agents.

So let’s start to see what improvements we can get from reusing as much of the task output cache as possible.

Start by clearing the build cache:

For me this is in my home directory ~/.gradle/caches/build-cache-* although you are probably better off creating a $GRADLE_HOME environment variable instead of directly referencing this directory.

Next perform a clean and then assemble with --build-cache flag

Each one of these files contain reusable info for a specific task, where the filename is the build cache key :

It’s important to note that each task has to set itself as “cacheable” for this info to be saved. This doesn’t happen automatically:

Task types need to opt-in to task output caching using the @CacheableTask annotation. Note that @CacheableTask is not inherited by subclasses. Custom task types are not cacheable by default.

There are third party plugins that work well with the build cache. The most prominent examples are the Android plugin 3.1+ and the Kotlin plugin 1.2.21+.

We can then re-run the build, without clearing build cache directory and see any time improvements:

The reason we still clean here is that we want to see what improvements we get just from build cache directory. You can compare times between your first build and second. You can also see from the output how many tasks are now cached: 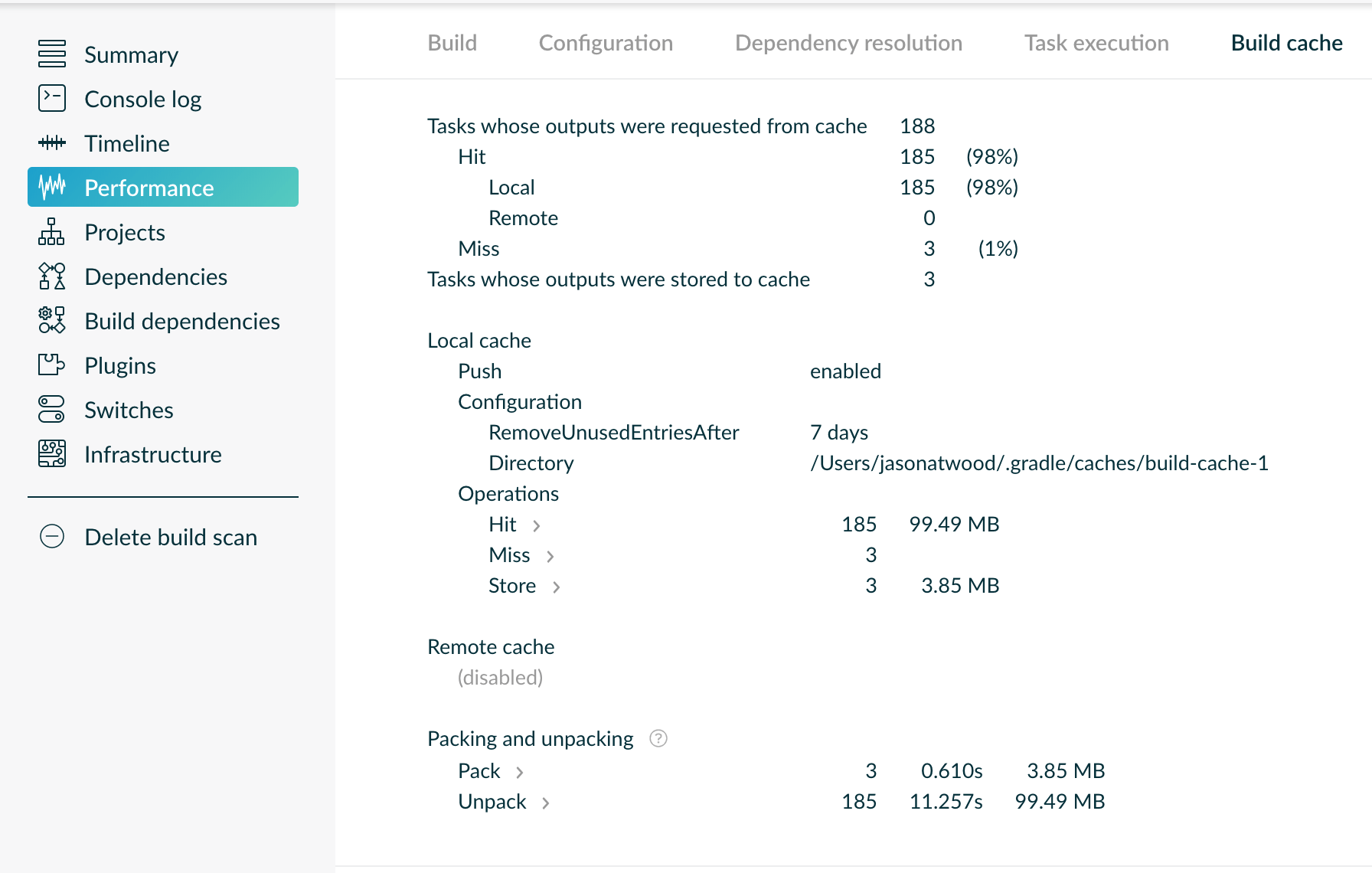 Side note: You’ll see that even on the first build, some tasks are coming from cache. At fist this was perplexing to me. I don’t fully understand this but, if you look at the scan report, and then look at the cache for those FROM-CACHE task, and then search for those caches on your local machine, you’ll see that they were created at the same time as the rest of the “new” caches. In other words, it looks like Gradle is actually using the build cache within a single build. A step may have already been run and cached, and then it was needed to be run again so it was pulled from the cache.

You can get the key for each cache from the scan report:

If you want to lower build times by using build-cache, Gradle has a whole guide on finding and fixing problems. The first part of this guide is the part I explained above about incremental builds.

Combine What We Have So Far

You want to get the former working first, and then tackle the later. We can then test the combined improvements.

Don’t change any code and run:

One benefit that I get from using build cache is improving build times after having to delete build directories. These directories contain more than just cached data for a current build. I regularly find myself calling ./gradlew clean to clear out all sorts of cruft generated by Gradle that I don’t want clogging up the nav window in Android Studio (we use several report-generating Gradle tasks that spew a lot of garbage). So even though I’ve deleted these outputs (and therefore most tasks are not up-to-date), I do still have valid task caches in the build cache.

The second reason is caching across different builds on the same machine. If you have multiple Gradle projects in different directories but on the same machine, with similar enough code (maybe you use the same git submodules to pull in some Gradle modules for multiple projects) then the build cache will allow you to share resources across projects. This also helps when you have two checkouts of the same project in different folders. You may do this if you want to test a pull request but don’t want to stash or apply your working copy. Let’s try that now:

We can see that on this fresh clone, Gradle was able to use build cache generated by other instance of this project, in another directory.

A final reason to use build-cache is sharing a cache across machines. This is a big deal if you have multiple developers and/or a C.I. machine that essentially has a fresh set of build directories for each build. We’ll talk more about this later.

It’s important to note that a task can be made cache-able even if the task (i.e the task’s authors) do not opt in by using @CacheableTask. Enabling this is outside the scope of this post but you can learn more here. If you are a Gradle plugin author you can use the above tests to see if your tasks are being cached and update your project accordingly.

Earlier, I said that build cache allows several improvements, the first of which is task output caching and the performance benefits that come with it. Another improvement that build cache enables is called composite builds. I won’t go into detail on composite builds, but the docs describe them as “simply a build that includes other builds”. You can see how caching one build would speed up another.

So far we’ve always been using --build-cache flag to enable build caching. We did this so we could easily turn it on or off to get a comparison. However if you are set on using build cache you should update gradle.properties:

This way you don’t have to add the flag to every Gradle command you call.

What about Kotlin projects? Kotlin Gradle Plugin already does caching, however caching kapt output is experimental and potentially unstable.

A big thanks goes to Martin Marconcini for reviewing this post.