Seven Samurai is a 1965 film by Akira Kurosawa. The story chronicles the struggles of a small farming village in rural Japan during the time of the Shogun emperors. The villagers discover that they will soon be overrun by bandits who plan to rape, kill and pillage. The villagers are helpless to defend themselves, so they travel to the nearest town to recruit samurai to defend them. The villagers eventually persuade a single samurai to take up their cause. This samurai then recruits six other samurai and together they form and execute a plan to defend the village.

The film is considered a classic in cinema. The direction, camera work, acting, and story line are all amazing. It is an entertaining film that I watch over and over. One aspect of the plot that I find incredibly powerful is understanding the team dynamics among the seven samurai. It serves as a lesson in modern team structure. 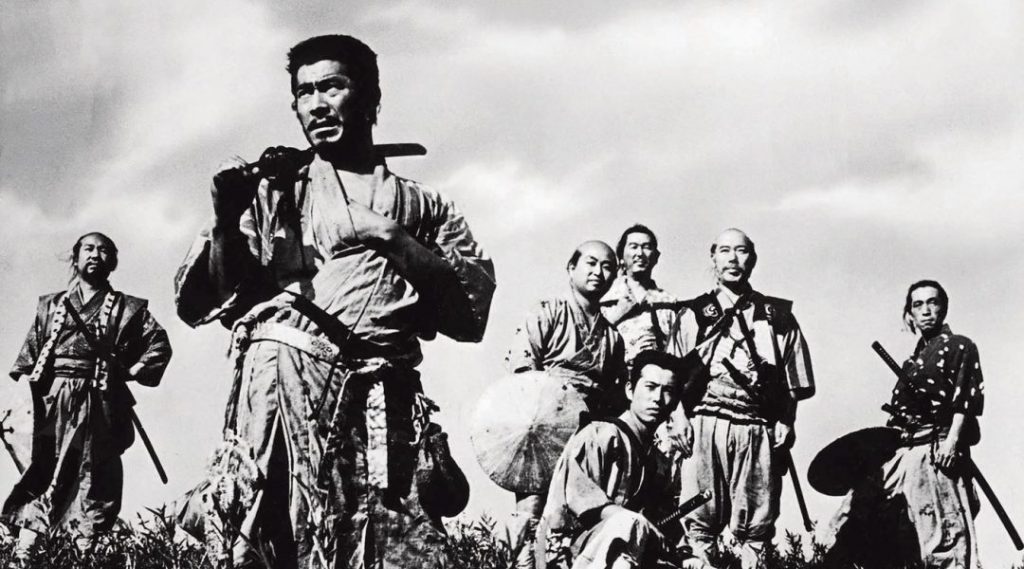 The story focuses on the samurai’s battle against the bandits. I don’t subscribe to “business as war” analogies. So even though I draw conclusions from a war story, it’s the struggle, cooperation and dynamics of the team that I focus on, not the context of their actions.

The formation of the team starts with the villagers approaching a single samurai: Kambei. The villagers witness Kambei risk his own life to save a child held hostage by a thief. Kambei shows not only his bravery and skill as a fighter but his wisdom and experience. He pretends to be a poor priest, and tricks the thief into letting his guard down before eventually killing him and rescuing the child. After this act, the villagers approach him. Kambei is at first reluctant to help them but eventually comes to understand their struggle. He agrees to help and becomes the de-facto leader of the team. 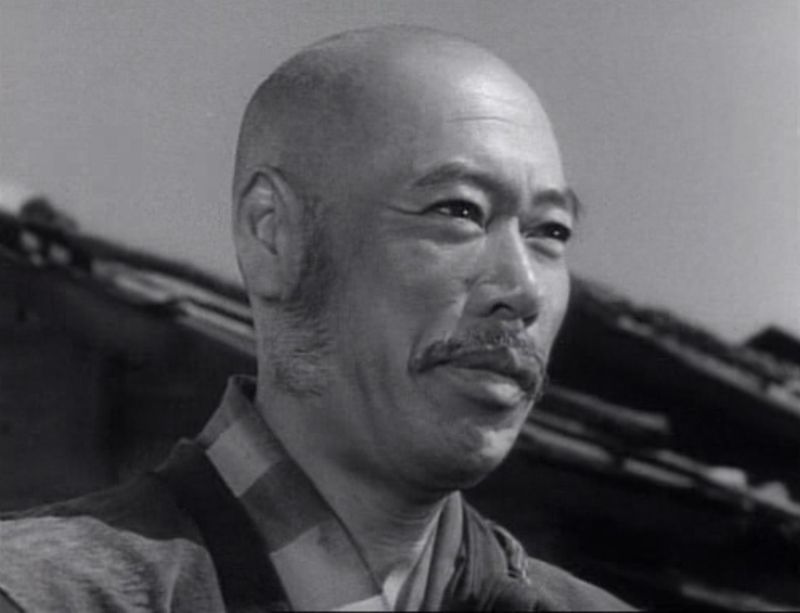 His first task is to understand the problem faced by the villagers. Before he even begins to form a team, he builds a detailed understanding of their struggle and outline of the problem ahead. Only then does he start to find other samurai to help him. Eventually he recruits six other samurai: two who flock to him, and four others he seeks out.

Katsushiro is a young, inexperienced samurai who approaches Kambei and begs to be his apprentice. Eventually Kambei agrees and allows Katsushiro to join him. Kambei accepts him as his apprentice even before he agrees to help the villagers. Throughout the battle Katsushiro is protected from the more dangerous parts of the battle but quickly learns from all of the other members of the team. He spends most of his time during both the planning and the attack at Kambei’s side. He is occasionally tasked with small missions himself once the team has developed trust in him. 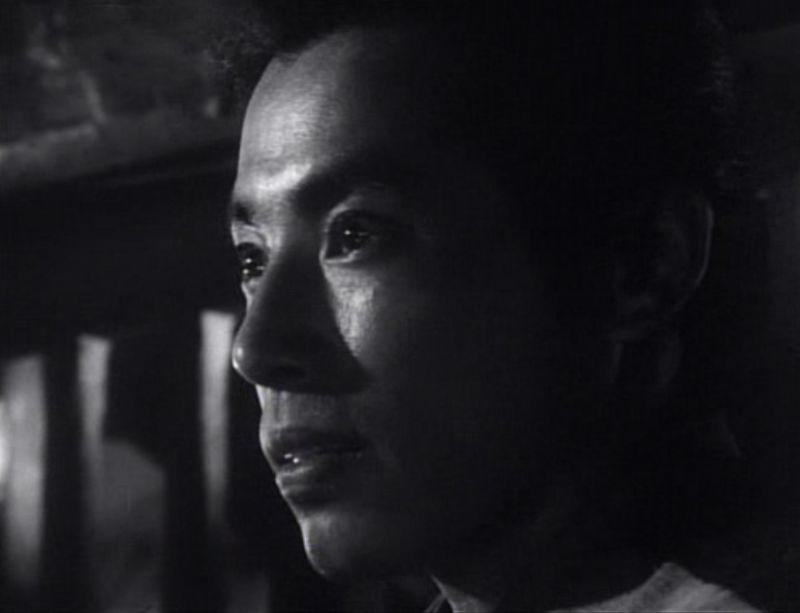 Gorobei is the first samurai recruited by Kambei. He becomes second in command. He is skillful with both a pike and bow and arrow. Gorobei helps plan the defenses, train the villagers, and acts as the front-line commander during the attack of the bandits. 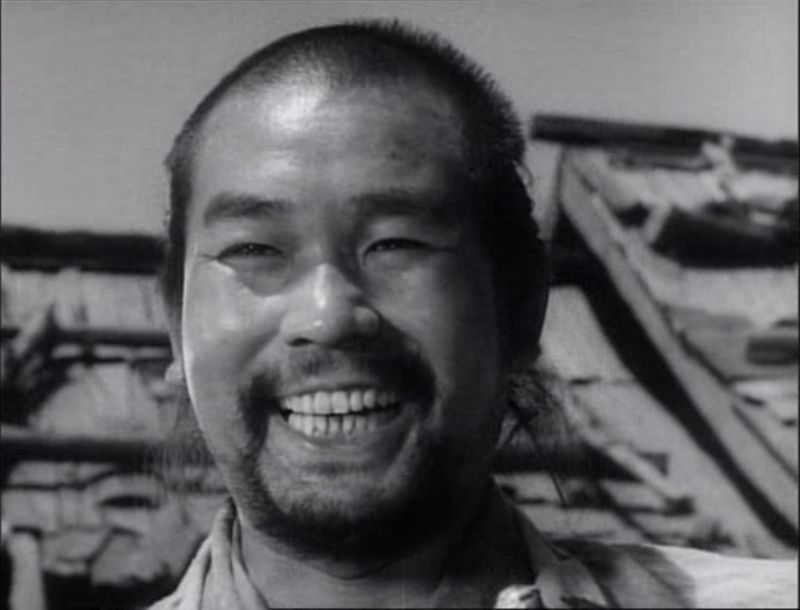 Heihachi is recruited by Gorobei. He is not a particularly good samurai, but he is honest and hardworking. He is working as a log splitter when he joins. He keeps the team in good spirits throughout their struggle. 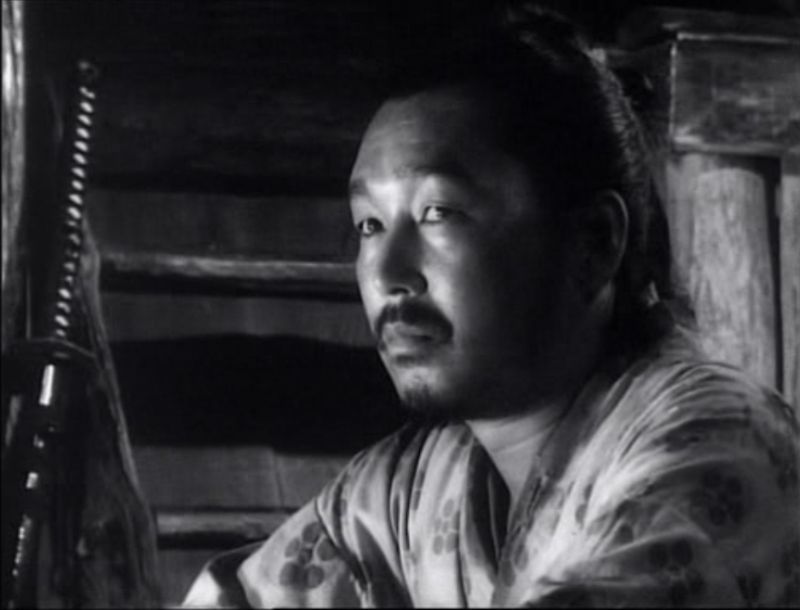 Kyuzo is recruited for his swordsmanship and his personal restraint, after the team witnesses him refuse to fight a man that he knows he can defeat. The man pushes Kyuzo into a duel and Kyuzo swiftly defeats him. At first Kyuzo is reluctant to join. He is “not interested in killing. He merely wants to perfect his skill.” Eventually he too understands the suffering of the villagers and agrees to join. He shows himself to be the most skilled swordsman on the team. 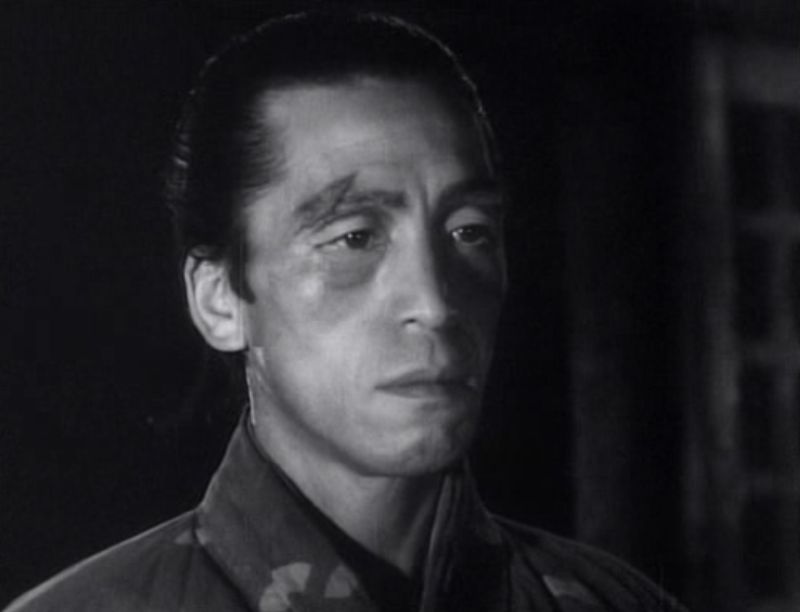 Gorobei also recruits Shichiroji, who turns out to be a war buddy of Kambei. They have fought together in the past and he is happy to rejoin his friend. Shichiroji also works to train many of the villagers. 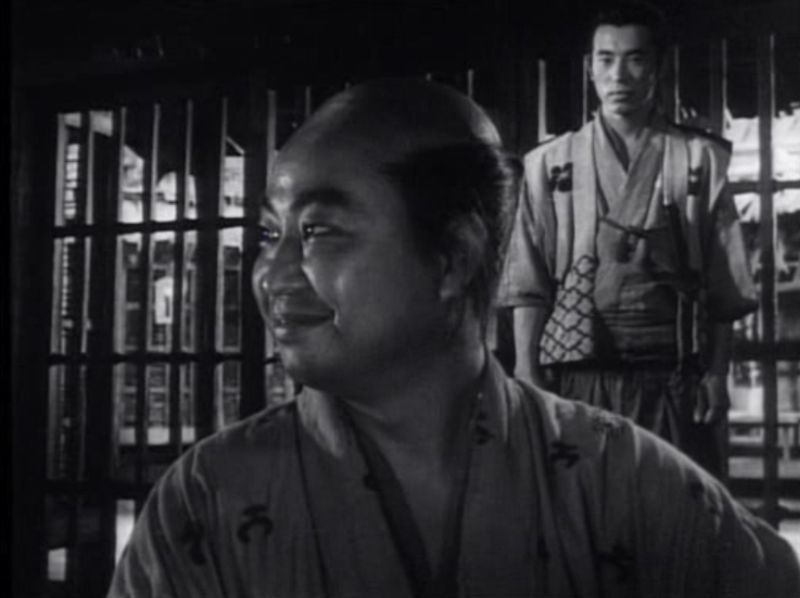 Last to join is Kikuchiyo. He stalks the team and joins after the team finally agree to let him participate. He is a goofball and a loose cannon. Most of the team doubts his skill until the battle begins and he finally demonstrates his worth. 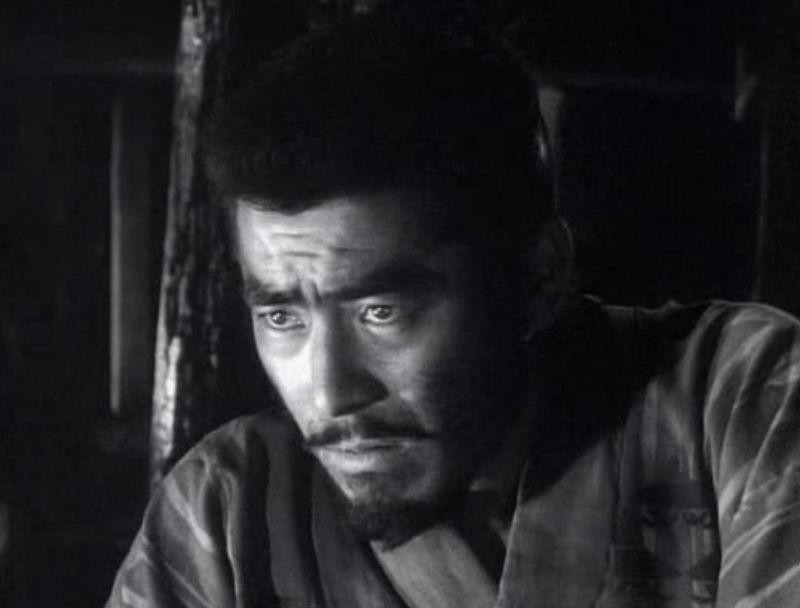 Once the team of seven assemble, they return to the village to plan their defenses and fight the battle. The recruitment, planning and defense abilities that the team exhibit have important implications for modern business teams.

The humility of the leader sets the tone for the team

When Katsushiro begs to be his apprentice, Kambei responds by saying, “I am not very skillful. I can’t teach you anything special. I’ve merely had a lot of fighting experience.”

His humility and groundedness influence his preparations. He is not over-confident in himself and knows that he needs to surround himself with a great team. In developing his defense plan, he never over-extends himself or the team; he knows that the task is risky and creates a conservative plan to defend the villagers. He knows that some of the village must be evacuate, that they cannot defend the entire village. He is quick to restrain Kikuchiyo who wants to run off into battle on the offensive. He openly recognizes weak spots in his plan along the forest road. 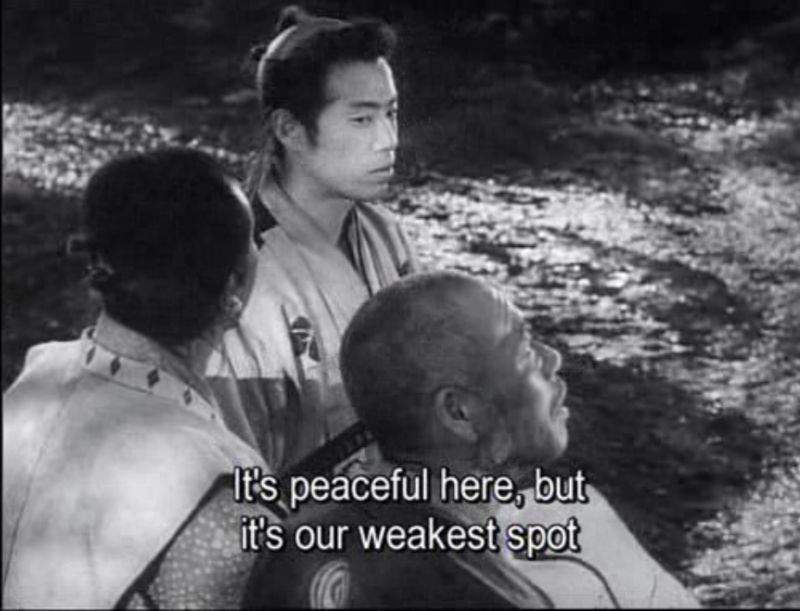 Kambei acknowledges weakness in the plan.

Kambei, despite being the leader, takes advice from others. It is ultimately Heihachi who persuades him to let Katsushiro, the apprentice, join the team as a full member. The defense plan is heavily influenced by insights from Gorobei who suggests the bandits will invade from the hills. 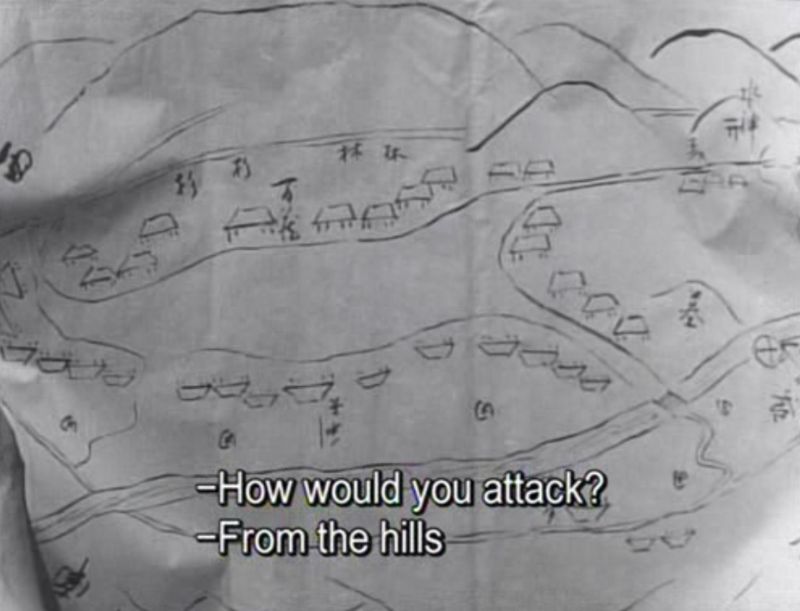 Kambei gets input from Gorobei when forming the plan.

Kambei is able to share, disseminate and relay the mission to each member of the team. One of his most important contributions is unifying the team and getting everyone on the same page.

The leader is not the most-skilled

Kambei recognizes that he is not the greatest of the swordsmen in the team. He recognizes and respects the superior swordsmanship of Kyuzo. Kambei is a capable swordsman and fights when needed, but he is not intimidated by the superior skill of others. When Kyuzo initially refuses to join the team, Kambei remarks, “I lost one, a fine swordsman… he merely wants to perfect his skill”.

The most-skilled is not the leader

Kyuzo’s only aim is to grow his skill. He is by far the greatest swordsman on the team and earns much respect from the rest of the team. He is quiet and does not brag about his swordsmanship, which he is reluctant to use in battle. Katsushiro describes him by saying, “He has the true samurai spirit, utterly fearless. Yet he is modest; he didn’t boast after he [stole a gun from the bandits]. And he went to get it as though he was going to pick mushrooms.”

He is not asked to perform tasks but knows when to volunteer. When the bandits harbingers discover the samurai, Kyuzo volunteers to chase them down without any suggestion from the others. When the time comes to steal guns from the bandits, Kyuzo steps up and heads directly into danger.

He has no interest in leading the entire team, or even a subset of the villagers. If he leads at all it is by example, not through commanding those around him. He is comfortable deferring to Kambei, who he surely knows is a less-skilled swordsman.

Not everyone on the team is the most-skilled

Kikuchiyo, Heihachi, Gorobei, and Shichiroji serve as the backbone of the team. They both take direction from Kambei and give direction to the farmers. They are capable fighters, but are not as skilled as Kyuzo. They are capable leaders, but as effective as Kambei. The team cannot function without them. Their most important skills include the ability to cooperate and integrate well with the team.

The villagers able to assist in the fighting are split into three units, each lead by Kikuchiyo, Gorobei, and Shichiroji. The three “lieutenants” then report up to Kambei. While they may not have been successful leading the entire team, they are able to lead and direct their individual units, motivating and organizing them.

The smaller team is able to self-organize

Before the main battle, the team agree to send three samurai on an offensive mission to raid the bandits’ headquarters. Heihachi, Kyuzo, and Kikuchiyo volunteer. Kambei, despite being the leader, remains at the village. The smaller three-man team self-organize and work together, without a clear team structure. They cooperate and communicate ad-hoc to complete the mission.

Clear lines of communication are critical

The success of the samurai in defending the village comes down to their communication skill. Messages are relayed by Katsushiro between the different sectors, headed by Kikuchiyo, Gorobei, and Shichiroji, and Kambei acting as central commander. Short and timely messages kept each sector up to date without under or over communicating. Kambei is not overwhelmed with information that cloud and confuse his decision making. In turn, he relays concise direct messages back to each of his lieutenants.

Even under a deadline, the leader passes on decent candidates

Kambei, when initially recruiting the team, looks out over the samurai passing down the street. He choses to reject a few decent seeming candidates. He knows he needs as much help as he can get, but he still finds the need to be discerning.

This point is very subtle. There is no dialog to convey Kambei’s thinking. The viewer never learns what he finds lacking in some of the samurai, but we understand that an incomplete team of good candidates is better than a large team of people who don’t fit well together.

Shichiroji and Kikuchiyo each lead a small group of farmers in training and in defense of part of the village. Shichiroji treats his cadre with respect. He is quick to praise his farmers and rally them to keep their spirits high. Kikuchiyo is frequently berating and intimidating the villagers under his command. In the end, he suffers greater losses. 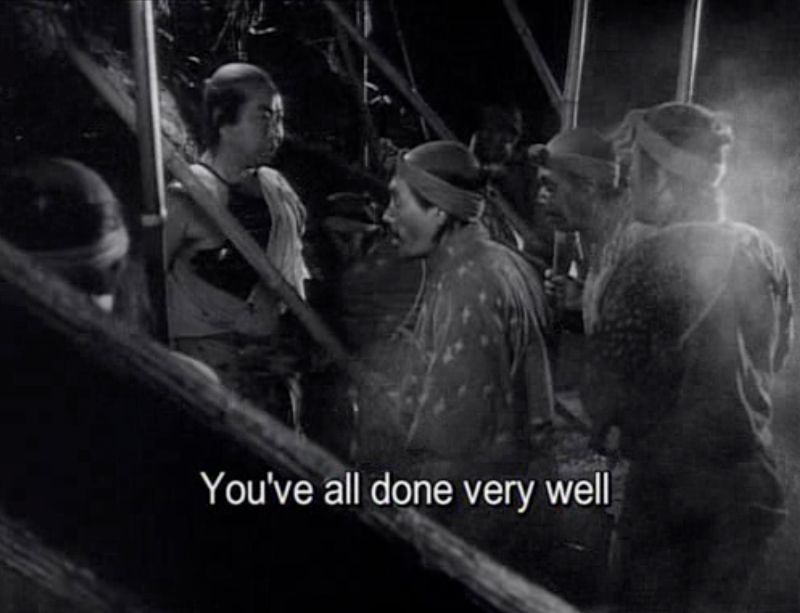 Shichiroji praises the villagers under his command.

The leader protects and fosters the apprentice

Kambei is quick to protect Katsushiro from his own inexperience and eagerness to jump into battle. He commands him to observe but not participated on the ambush on the two bandits. Kambei bars Katsushiro from participating in the offensive on the bandit headquarters. However he gives Katsushiro the chance to fight during the final battle as bandits are trapped in the village. 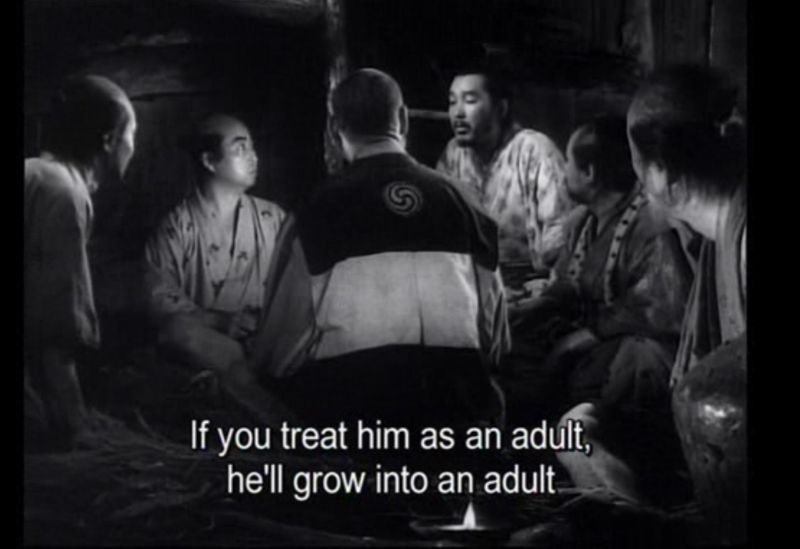 The team discusses how to treat Katsushiro, the apprentice.

Trust is the foundation of all team dynamics

None of the above lessons and relationships could be possible without trust. As I said before, I generally dislike “business as war” comparisons. However one similarity that does hold up is the “brotherhood among soldiers” idea. It is ultimately the trust that soldiers place in each other that allows them to succeed on the battlefield and this translates directly to business teams.

In the end, the samurai defeat the bandits, despite loosing some members along the way, and the villagers are spared. During its three-plus hour runtime, the film presents many great examples and insights into how a team can operate and be successful. I’ve applied a lot of these lessons to the teams that I’ve worked on, whether I find myself as an apprentice, core contributor, or leader. Every time I rewatch this film I come away with something new to consider, either in my own behavior or in those around me.