I’d posted before about working as an electro-mechanical engineer. Eventually, I left that position to attend grad school. I never wrote about finishing up my work, and left much unmentioned in my prior post. I hope wrap up my involvement at ____ by talking about and showing off some of the projects I was responsible for.

The researchers at ____ spend most of their time applying their chemical-coating patents to new materials and applications. With each new application, there is a learning curve to achieving the functional requirements of the coating. By adjusting chemical compositions, application speeds, combustion rates, and application methods. Because the researchers are every day developing new experiments, their tools are always changing. It was my responsibility to work with the researchers and design tools that could quickly adapt to their changing needs. This really was the perfect extension of my rapid prototyping experience at CATEA. I was responsible for the complete machining, assembly, wiring, and coding of my designs. Some days I would spend the entire time in the machine shop; other days I’d be exclusively coding LabVIEW. Most days, however, I was constantly jumping back and forth between projects at various stages of design and redesign.

I was responsible for projects of all sizes. I developed one-off control boxes for caustic liquids. I built entire chemical combustion reactors for production use. I even made cross-country trips to other another research center to develop and test early-production equipment of my own design. I made sure to document most of what I built, both for myself and to pass on to future employees.

The best part of this job was definitely the freedom I had to pursue solutions of my choosing. Like CATEA, I had complete access to a machine shop. I also had access to a warehouse of spare parts and components. “Need a 2 HP blower that can draw 10 psi vacuum?. No problem; aisle 5, top shelf.” “How about a variable frequency drive to control it? No problem, we got four different models.” Everything that wasn’t available in-house was a phone call away. I was on a first-name basis with the ITEM, Swagelok, and National Instruments sales reps. If I couldn’t buy it or machine it myself, we had a contract machinist on call. I also had regular relationships with outside water-jet cutters, welders, and sheet metal fabricators.

It was at ____ that I picked up most of my electrical design experience. It was definitely a trial-and-error approach where I blew up more than my fair share of controllers and power supplies. Many times I was developing process tools which would be used in ____’s Class 10 cleanroom, so I had to learn cleanroom best practices.

Here are some projects that I worked on: 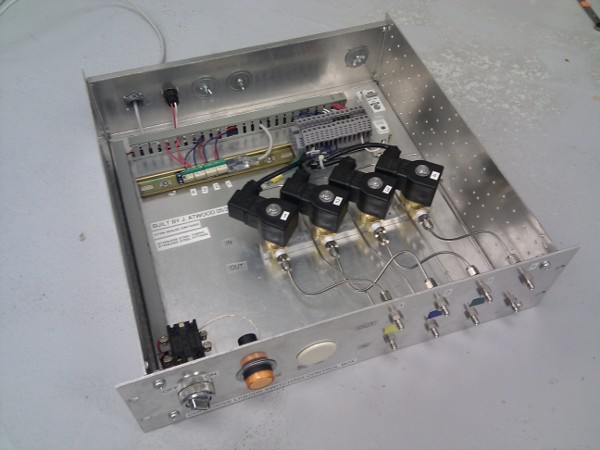 A single rack-mounted control box for high pressure corrosive liquids. The valves are controlled by a USB relay board, controlled via a LabVIEW interface. 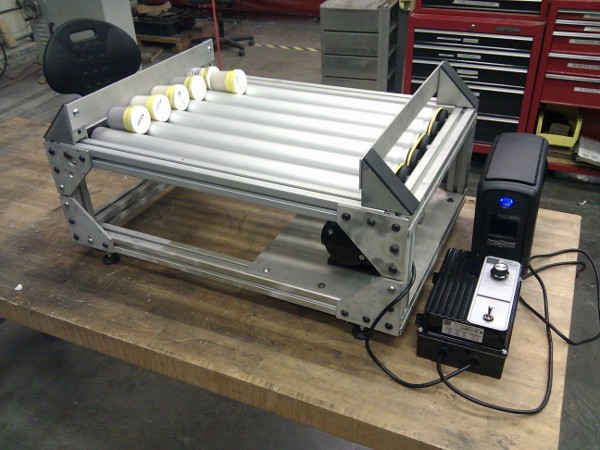 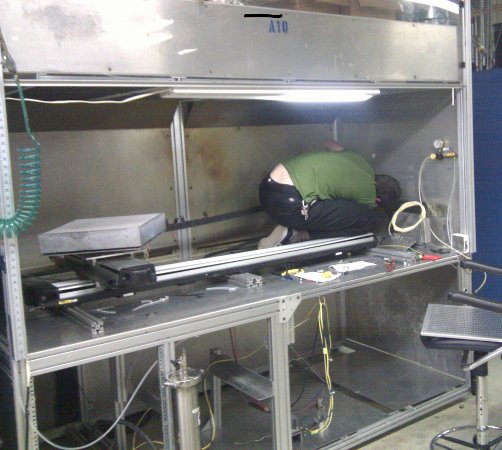 Many of our coating techniques were applied in a Cartesian scanning method inside a chemical hood. A regular technique was to pair two single-axis drives perpendicularly. Sometimes the set would operating horizontally, other times it would operate vertically. The process also required regulating pilot fuel, cooling gases, and combustion “jets”. The motion and gas flow operated synchronously, all controlled by a PC running LabVIEW software. 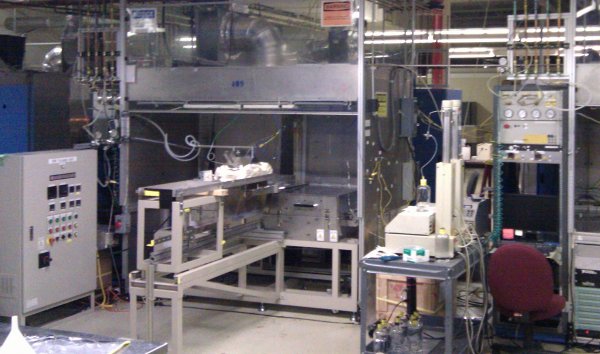 Sometimes I had to interface with special equipment designed for ____ by outside vendors. As part of one project I had to control a substrate sled inside a giant oven. The system was equipped with two turbocharger-like air heaters ramming  super-heated air into the oven. The supply gas, temperature-regulated heating, motion control and, most importantly, the safety systems were again integrated into a LabVIEW interface. 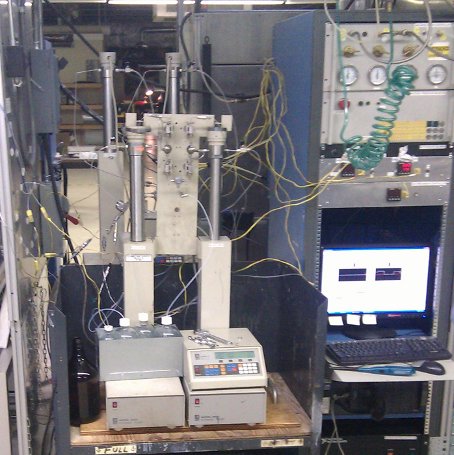 Unlike ____ ‘s smaller processes, this application required a high-volume completely-uninterrupted combustion fuel supply. As such, I assembled four giant syringe pumps (each capable of several thousand PSI supply and automatic refilling). I developed a custom controller for these pumps to ensure continuous fuel supply and constant-flow-rate transitions between different combustion fuels. 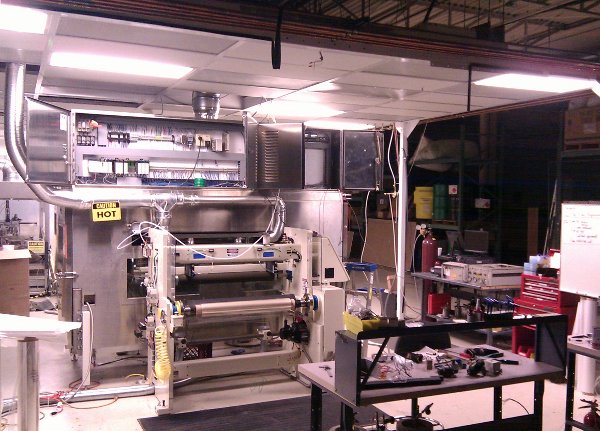 About half of my projects were too large to fit inside a chemistry hood. These projects were large industrial scale standalone machines.  Our process equipment was built around existing material handlers. One piece of equipment we purchased for in-house usage. Another set of equipment was so large that we had to develop portable equipment and travel cross-country to an outside facility. I made three trips to this research center which manufactured consumer-grade product packaging. The coated packaging material from these trips was used by our client, inserted into their production line to create consumer-grade product.

Our in-house material handler (white machine)  wrapped inside a giant crawl-in furnace (stainless steel box). This project was my personal baby. I worked closely with a coworker (and the friend who introduced me to ___) to build and test this system. I really spared no detail or expense. This machine was responsible for handing about three times as many sensors, valves, mass flow controllers, and pumps as any of my other projects. To organize everything and accommodate for regular changes/upgrades, I built an entire control panel inside the cabinets of the furnace (top of stainless steel box). 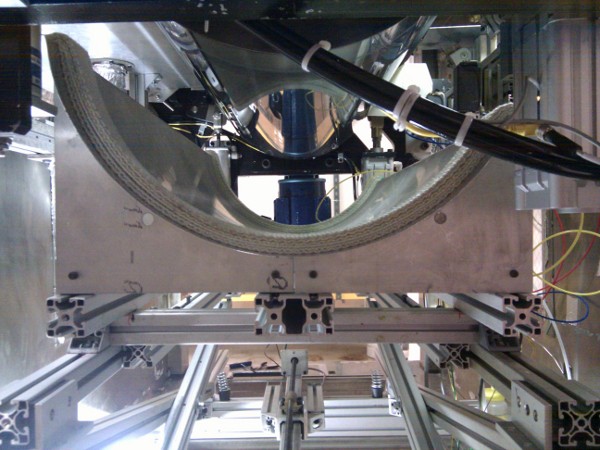 Unlike other systems, this one required precise control of the exhaust gasses as they passed over the moving substrate. I designed and constructed a custom exhaust manifold and exhaust cowling to hold the exhaust gas near a rotating drum holding the substrate. It needed to cover a large area and handle a high volume of gasses so it was quite heavy.  However, I still needed to be able to get inside the furnace to access other equipment. So I constructed a special hoisting mechanism that would lift the cowling in place or allow it to retract and be pulled out of the machine.

The most massive project I worked on was a chemical combustion reactor. The combustion chamber was taken from a Rolles Royce jet engine. The system was basically a giant flame thrower aimed into a vaccum cleaner. The system burned an incredible amount of fuel and was probably the loudest most dangerous machine in the building. The goal was production-grade chemical manufacturing that ____ sold directly to chemical supply companies. My goal was to ressurect the old unfinished project. Being a production machine, the inventor (my predeccessor at ___) had designed the entire system before assembly and then outsourced most of the wiring to a panel shop. The finish on this project was top notch. However, it was never completed or tested. My goal was to basically reverse engineer his work and determine what control equipment corresonded to which modules in the LabVIEW control. This machine was so massive it required four people to operate: myself at the control panel, a chemical engineer monitoring the pumps and reaction rates,  a technician running around monitoring additional temperatures with an IR gun, and my boss (the CEO) coordinating us like a submarine captain to get the reactor running. We had some trouble getting the machine to sustain combustion but the first time we successfully fire it up it was roaring and rumbling and blasting a giant flame. It was a total rush.

I also took a bunch of small videos of each project. I’ve tried to piece them all together into a little video.  Some of it might not make sense out of context. But you should be able to enjoy all the cool flames and moving parts.