Georgia Tech’s Robotics Initiative has continued the free lecture series this semester. The bad news is that this semester’s schedule has been so poorly advertised to the public (no eye catching flyers like last semester) that I missed the first three of the year. The good news is that if you search for it, you’ll find that this semester’s schedule has lectures planned almost every week. Last week’s guest speaker was Dr. Oussama Khatib, who is a member of Stanford University’s Artificial Intelligence Lab and Professor in computer science. Furthermore, he is the President of the International Foundation of Robotics Research. Dr. Khatib presented his research which focuses on human-centered and human-friendly robotics. Dr. Khatib began by explaining the underlying motivation for his research. He confirmed what many past guest lecturers have stated, that the challenges in today’s robots are sensing, perception, planning, and control. However, his research in human-centered robotics has lead him to believe that further challenges include interactivity, human-friendliness, and mechanicisms which promote both safety

and performance. He says, “We need to make sure that they [robots] will have the skills and abilities of the human so that the interaction can be a natural one.” In the past, robots were designed under the pretext that humans would not be within the workspace of the robot while it was in operation. However, Dr. Khatib is working to intersect the workspace of robots and humans. As such, safety becomes a measurable requirement which is always competing with performance. Distributed Macro-Mini (DMM) actuation is Dr. Khatib’s attempt at a human-friendly hardware that is designed to minimize dangerous collisions between humans and a standard robotic arm. By modifiying a criterion developed by automotive crash-test experts, Dr. Khatib defined a manipulator safety index (MSI) which combines the effective stiffness, effective inertia, and implact velocity of the impacting device (the robotic arm). When this criterion is used to evaluate a standard Puma 560 robot, the robot was found to have “almost 90% chance of serious injury” (MSI of ~750). The Puma robot, like most robots, was over-designed with large capacity motors to handle tasks at any frequency. However, by utilizing smaller (less torque) motors for high frequency motions and isolating the normal (high torque) motor for low frequency motions, the robotic arm greatly reduces its impact inertia. Using this method, Dr. Khatib’s team built the much safer, two-armed DMM robot with a MSI of ~200. Furthermore, this reduction in motor size allowed for more precise movements which increased the overall performance of the machine, proving that human-friendly designs can improve both safety and peformance. 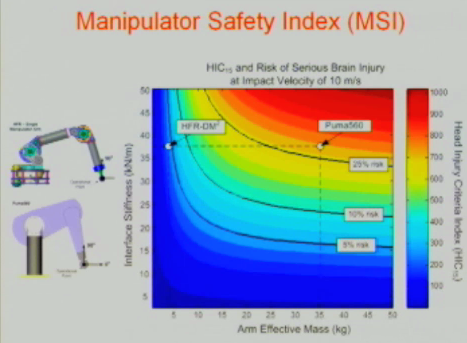 Slide from Dr. Khatib’s lecture showing the MSI reduction of the DMM robot versus the Puma 560 In addition to experimenting with physical mechanisms, Dr. Khatib also studies the controls neccessary for such mechanisms. Dr. Khatib’s team has developed a software simulation which mimics the dynamics of a 30 degree of freedom humaniod robot. The simulation accounts for joint limits (i.e knees can’t bend beyond 180°) and centers of mass of each limb. With this software, Dr. Khatib has been able to create a control structure which decomposes robot posture from robot task. To relate the problem to human movement, Dr. Khatib explains, “your hand can be moving but your body can be positioned in infinite ways.” The simulation allows the user to set the task (location of the hands and head) and the controls will adjust the posture (position of hips, legs, shoulders, etc.) to maintain a certain criterion. In the example presented, the robot must balance on one foot. Shown in the slide below, the torques in the motors (Г) are the torques which produce the task and the torques which produce the posture. They are completely decomposed so that any torques in the posture (Г_posture) have no effect on the forces at the task points (F_task). J is the Jacobian of the tasks, N is the nullspace of the Jacobian. So, as in Dr. Khatib’s example, if the task is that the hands and head remain stationary, the robot may reposition its body without affecting the task. 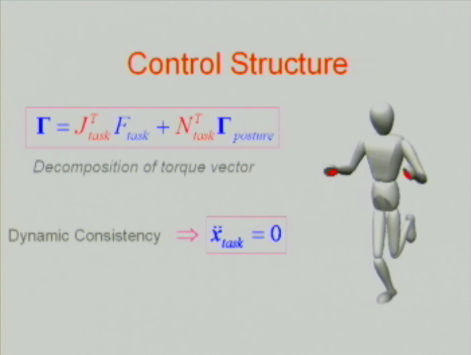