Chris Kelly and I have been practicing as Madison partners and competed in the two-day Working Man’s Madison. This was a first-time event for Dick Lane Velodrome but a small yet enthusiastic turnout of six teams provided plenty of competition. The top team was clearly Oscar and Joey from Team Mountain Khakis. These local guys are serious business. The 3-6 place teams swapped positions through the 6 races. Chris and I ended in 5tht overall. We will definitely invite many more teams next year. A 10-12 team field of all B group racers would make for a killer event.

The second Pro Race Series event of the year was in early July and I think its safe to say that Faster Mustache cleaned up. We had four riders in the B category: Chris Kelly, Justin Barber, Gregg Rothmeier, and myself. Jim Hodgson raced in his penultimate C group event, graduating to the B’s the next week.

Part of the omnium included a two-round sprint tournament. I raced to a second place finish in my first heat to advance to the finals, where I placed third behind Stafford Brooke and Jan Kolar. The placing earned me my first prize money at the track. 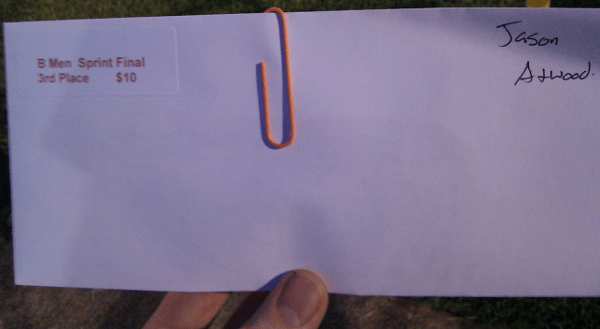 The remainder of the day’s events were tough but I rode very well. The point-a-lap is not my favorite event and with four teammates in the same race, we decided to play some team tactics. The team started the race perfectly, getting queued up together in the pack. As the race started Justin and Chris rolled to the front of the group and Gregg and I, behind them, let them slowly slip off the front by slightly reducing the pace. No one in the remaining field was eager to make an attack over us and Justin and Chris were able to generate a half lead lap before anyone came after them. Justin was able to finish the race in second place.

The points race and the miss-and-out were equally tough but I was feeling strong and decided to score some points for myself. I finished 5th in both races. My combined standings on the day put me 7th overall, besting my 8th place from May. The evening finished with a preview race for the next Pro Race Series: The Madison. Chris and I were both tired from the entire day and were up against several pro teams including some current and former national champions. We rode hard and finished 5th.

At the end of the day, Justin finished second in the B group and Jim swept the C group wining the overall omnium and most of the individual races. Combined the team won $300 and spent most of it at Elliot Street Pub.

Wednesday racing at the velodrome is also going well and I am riding much stronger than last year. Statistically, my best race is the chariot race, a one lap, standing start drag race. I was lucky enough to have a win caught on tape to prove that yes, I can win sometimes.

Currently Faster Mustache is leading the Team Competition. I am sitting in 12th place in the Individual Competition, with teammates Justin (1st), Jim (6th), and Chris (10th).

Despite all of the action at the track, I have had time to race on the road this summer. My first road race was the Georgia State Championship Road Race in Augusta. After the 45 miles (3 laps of 15 miles) in the dead of the afternoon, I eeked out a respectable 6th place in the Cat 5 race, only 6 minutes from capturing the highly-coveted State Championship Jersey. Winning this race is definitely on my to-do list for next year.

Just a week later, I rode in the Dick Lane Velodrome Century: 100 miles through south Fulton county. This race was a true test of endurance and pain, as the course was full of serious hills and long stretches of open highway with little shade. I rode with the break away pack of 4 riders, only to take a wrong turn. The break dissolved coming back into East Point and I chased my teammate Eric Nicoletti the entire distance back to the velodrome. Our detour put us in 4th and 5th overall, having ridden ~5 miles longer than the top three riders. This was the longest ride, in time and distance that I’d ever done and was surprised how well I felt all the way to the finish.

Most recently, I rode in my first non-circuit road race: the Tour de Gaps race in North Georgia. The race was a 35 mile stage from the top of Woody’s Gap, into the valley, and back up Wolf Pen Gap. I had an excellent strategy for the race from my friend Rob Evans. He knew the best places to attack and defend and my que sheet made things more comfortable. This was a combined Cat4/5 race so the pace was more than I was expecting. I finished 12th in my category and I was completely spent. One of the rules of this race was that riders were not allowed to toss empty water bottles throughout the race. With 15 miles to go, I was switching one bottle from my back pocket to my cage when I accidentally dropped the bottle, right into the referee’s motorcycle. There was no way he was going to let me just leave it, so I stopped, went back for it, and had to chase down the group which was quickly pulling away. I was able to make up time on the hills and spent all of my energy getting back with the group. By the time we reached the final climb, I was blasted and the Cat 4 guys upped the pace and the group really spread out. I tried to pick off as many riders as possible and felt that another 1,000 meters would have netted me another 3 positions. This was my favorite race of the year.

Lastly, this summer I participated in the Brownwood Bike Rally in East Atlanta. I raced 7 laps around East Atlanta including a section through Brownwood Park. Road bikes were not meant to be flung over roots and dirt but I handled the bike very well. I received a compliment at the end on how well I did despite being on a road bike. Most of the fast guys were on cyclocross bikes and I think I need one. My proudest moment of the race was sticking it to my friend (now retired) World Champion, Jeff Hopkins.

Next on the agenda: more track racing, a top 10 individual standing, mountain bikes, and maybe some cyclocross racing.